Senior site manager Stephen Scott adjusts a bi-fold door in the Habitat for Humanity home at 121 Park St. in Lyons on Wednesday morning. The new 1,300-square-foot home is the first Habitat home in Lyons and will be dedicated Saturday (Lewis Geyer / Staff Photographer)

When he lists the parts of Lyons he misses since being displaced by the historic 2013 flood, one wouldn’t expect Ramon Vasquez to list the St. Vrain River. After all, it was the river that flooded his town and destroyed his home, causing him and his family to lose everything.

But Vasquez misses the sound of the river and the quiet of the foothills town. Soon, thanks to Habitat for Humanity, he’ll get to be near that river again.

Habitat for Humanity of the St. Vrain Valley has been doing work in the area for 26 years, and for the past year and a half, it has been focused on flood recovery. Right after September 2013 flood, Habitat went into flood-damaged areas of Lyons and worked on critical repairs on homes for owners who needed the extra assistance, then set its sights on getting families whose homes were irreparable into new houses.

So far, Habitat has built homes in Longmont for two flood-displaced Lyons families, but for the first time this Saturday, with the Vasquez family, Habitat for Humanity is returning flood victims back to their land, to their true home.

“Lyons has always been part of our service area, but we’ve never been able to build there,” said John Lovell, director of development for Habitat of Humanity of the St. Vrain Valley. “There’s a lot of feeling that the flood is behind us, but it definitely isn’t for Lyons.” 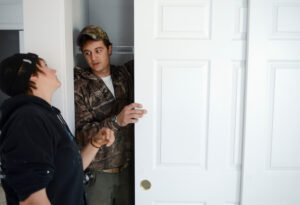 Besides the repairs, of which there have been 19, Habitat has worked with eight other displaced Lyons families who either have been put in homes outside the Lyons area or are currently waiting for Habitat homes. The Vasquez family is one of those eight, a third-generation Lyons’ family that has called the area home since the 1940s.

Ramon Vasquez is blind, and his wife, Carmen, is the main caretaker of the home, currently working only part-time so she can care for their two sons – Aaron and Alex. Aaron is a sophomore at Lyons High School, where he plays football and wrestles, and Alex is in preschool. The family is confined to a small apartment in Longmont since having to evacuate a year and a half ago, away from their neighbors, friends and hometown.

“That’s my hometown,” Ramon Vasquez said. “I was raised there. There’s nothing like your own home.”

Habitat for Humanity found the Vasquez family through someone at All Hands Volunteers, another local non-profit that has been helping Habitat with a lot of the post-flood construction. Lovell said he could quickly tell that the family was clearly a part of the community but lacked the financial resources to rebuild on their washed-out land. Habitat knew they could step in and help. As Lovell put it, “there were a ton of organizations that mobilized and came (when the flood happened), there were very few that stayed.” Habitat stayed, they were already here long before the flood, and they knew they could help the Vasquez family.

“If it wasn’t for them, I don’t know what we’d do,” Vasquez said. “They’ve been great with us. They’re great people.”

The Vasquezes have made it through the challenging times thanks to the support of their family, friends, local churches and other non-profits like Habitat. Now, knowing a home is currently getting the finishing touches put on it in their old neighborhood, they are eager to return.

“There is a lot of history there, and a lot of good folks,” he said. “The town is ready for us to come back.”

This is far from the only work Habitat for Humanity will be doing in Lyons; in fact, Lovell said, he sees it as the start of “a second burst” of rebuilding in the area. The state of Colorado provided Habitat with enough funding for 35 new homes right after the flood, so there are still plenty of families the organization can help. The Habitat for Humanity home at 121 Park Street in Lyons is seen Wednesday morning. The new home will be dedicated Saturday (Lewis Geyer / Staff Photographer)

In addition, there is a current proposal, the Bohn Park flood recovery project that would allow Habitat to work with the Boulder County Housing Authority to build more homes for displaced, qualified families in Lyons. The proposal is waiting on voter approval in March, but if approved will allow for more than 70 homes to be built, some of those Habitat homes.

For the Vasquez family, this is just the beginning of a new life in their old home, one they always knew they would get back to some day.

“We had stress of course, but we kept our head up and kept up faith,” he said. “We just hoped. We kept having hope that we would return back to Lyons eventually.”